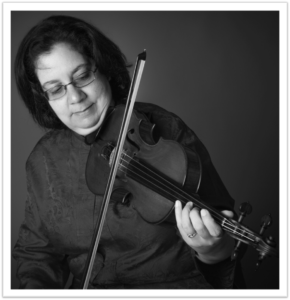 The patronage honours Ishani’s love of music and commitment to the development of young people who are interested in music. She believes in creating opportunities for children to develop and hone their talent.

Ishani’s support of our organisation will bring some much-needed attention to our ongoing outreach and development programmes, and to the important work being done in the community, ensuring we have a bright future.

Ishani is a violinist with a distinguished career on both sides of the Atlantic. After being a multi-prize winning student, she graduated from the Guildhall School of Music in 1988 and became a member of the BBC Radio orchestra, the London Philharmonic and the English Chamber Orchestra.

Between 2010 and 2020 Ishani lived in the UK teaching at the Hindhead School of Music, and privately. She founded the Waverley Ensemble, giving Baroque concerts in the south east of England. In 2017 Ishani launched the Haslemere String Competition for young string players across England, giving talented students the opportunity to perform and develop their future careers. Ishani also established the Issigeac International Music Academy for amateur string players to perform chamber music and to be coached by the Tippett Quartet which she manages.
Ishani is an Associate of the Royal College of Music and of the Guildhall School of Music and Drama and currently lives in New York.

Subscribe
to keep up to date with WCYO concerts, events & performances

Connect with us on Social Media

Use SnapScan for payments and donations We strongly believe that any child should have the opportunity to join our programs regardless of their background, ability or social economic status, because music education should be a right NOT a privilege.